Playwright Peter Lefcourt let his imagination go wild in THE DEATH AND LIFE OF MARY JO KOPECHNE; and the result turned out to be clever, exciting, and fascinating. For those unfamiliar with Mary Jo Kopechne, she was born in Pennsylvania and raised in New Jersey, a devout Catholic girl who would go on to achieve headlines when her lifeless body was found in Senator Ted Kennedy’s vehicle, submerged in a creek on Chappaquiddick Island, off the east coast of Martha’s Vineyard in Massachusetts. Thus, Mary Jo Kopechne ended up becoming a footnote in history. Before her untimely death, her life had been politics. She worked on several campaigns, including Robert F. Kennedy’s run for the presidency – and so hobnobbed with Kennedy aides and movers and shakers, including Ted Kennedy. But author Lefcourt raises an intriguing question about her footnote status in history. What if never-answered questions about her death at 28 became a major influence on American politics for years afterwards? 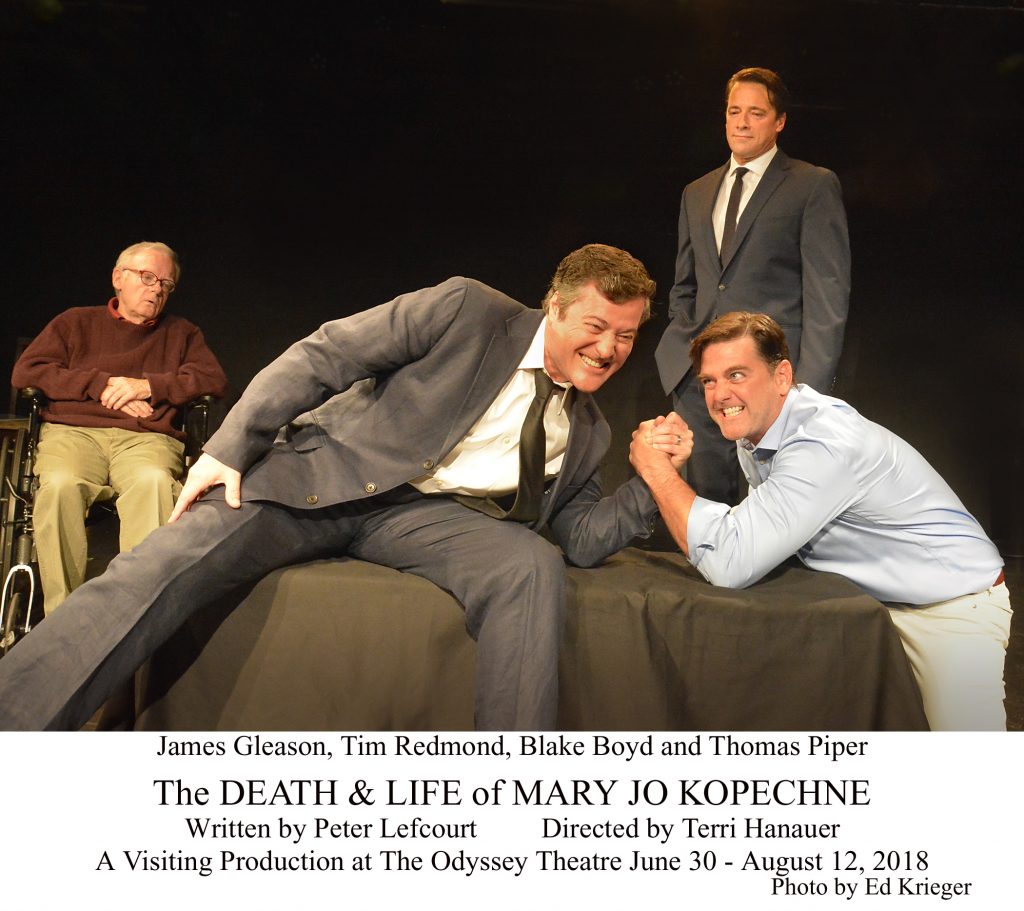 It is the middle of the night on July 19, 1969 in the Shiretown Inn in Edgartown, Massachusetts. An anxious and confused Ted Kennedy (Thomas Piper) has just returned from pulling himself out of his sunken vehicle after driving off the Edgartown bridge. But wait. There was a passenger in the vehicle who may still be trapped – Mary Jo Kopechne (Cathryn Dylan). What to do? Ted is a senator with aspirations for the presidency. Can one drunken evening have a permanent effect on his dreams? 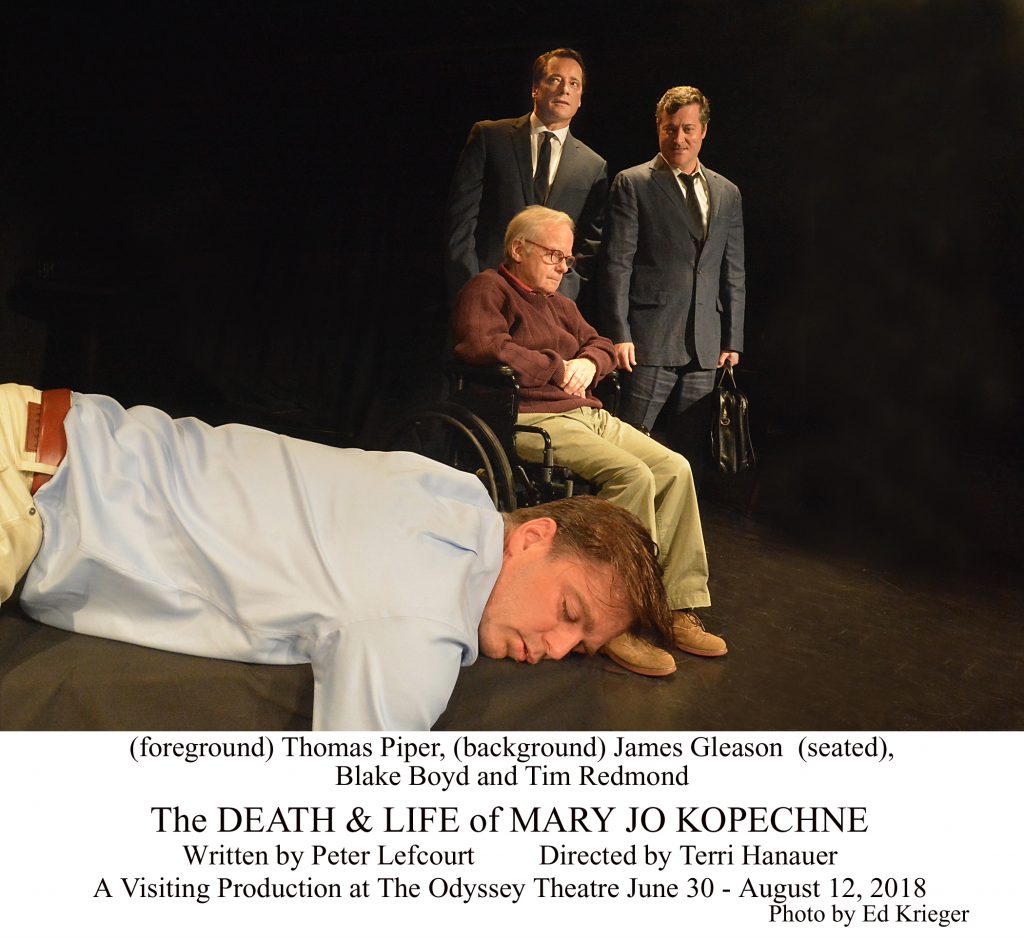 Then the door to the motel room bursts open to the hustle and bustle of the rest of the Kennedy clan males – John (Blake Boyd), Robert (Tim Redmond), and even Joseph (James Gleason). Ted is stunned. Aren’t his brothers dead – and isn’t his father close to death? But this is a moment in time which calls for all the clever planning and political machinations that the Kennedys can muster.

Lefcourt manages to insert historical fact in a palatable and often amusing and sometimes controversial way into the mouths of his principals as he raises the many questions which followed the Chappaquiddick incident. Each talented actor in THE DEATH AND LIFE OF MARY JO KOPECHNE makes the role his own with superb results. Lots of “what-if’s” prove to be involving, absorbing, and thought-provoking. Director Terri Hanauer has the pulse of this tale and helms the show with precision and compassion. This is history – sort of – but also a journey into the hearts and minds of people who lived through the events. With a bit of fantasy and lots of conjecture thrown in. THE DEATH AND LIFE OF MARY JO KOPECHNE is a splendid marriage of fact and fiction which will excite and entertain audiences. This is a must-see play which is well-written, carefully directed, and masterfully acted. 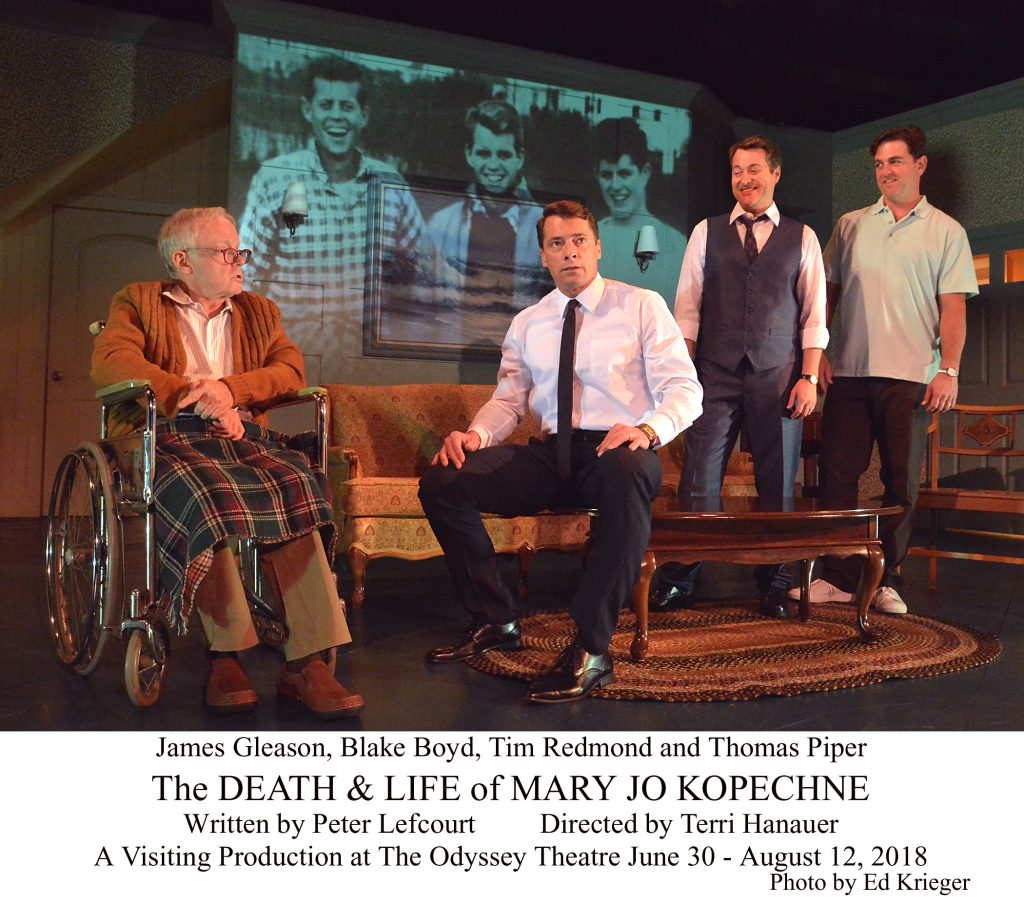 Before Review – a Bittersweet Encounter

December 1, 2019 Elaine Mura Entertainment 0
Spread the love
Spread the loveWritten by and starring talented Irish actor Pat Kinevane, BEFORE is, according to the author himself, “a piece about love…and what happens if we block it from each other.” A fascinating combination of […]

The Serpent Review – The Book of Life

March 11, 2020 Elaine Mura Entertainment 0
Spread the love
Spread the loveA child of its times – the rebellious and incendiary 60’s – THE SERPENT was first presented in 1968 incorporating the innovative techniques of improvisation, dance, and mime. Author Jean-Claude van Itallie’s play […]

October 18, 2018 Elaine Mura Entertainment 0
Spread the love
Spread the loveRomanian-French playwright Matei Visniec may not be well known in the U.S., but his fame extends throughout Europe. Adapted by Jeremy Lawrence, OLD CLOWN WANTED explores aging through this absurdist, cynical, tender, and […]