The timeless music of George and Ira Gershwin plus an aviator, a Channel swimmer, exuberant dance numbers, sparkling costumes, romance, comedy, and America in 1927 equals My One and Only, Stage Door Theatre’s upcoming production at the Lauderhill Performing Arts Center (LPAC). The show opened on March 8th and will run through March 24th.

Created to showcase the Gershwin’s’ marvelous music, My One and Only ran for two years on Broadway and won 6 Tony Awards and 3 Drama Desk Awards.

The plot is classic musical comedy: Captain Billy Buck Chandler, a barnstorming aviator, falls for Edythe Herbert, a former English Channel swimmer and the star of Prince Nicolai Erraclyovitch Tchatchavadze’s International Aquacade. Billy, who plans to be the first man to fly solo across the Atlantic Ocean, hopes to win Edythe’s hand by taking a crash course in sophistication at Mr. Magix’ Tonsorial and Sartorial Emporial. Billy’s wisecracking female mechanic, Mickey, adds a bit of sass as a series of escapades and misadventures keep the potential lovers from finding happiness.

Jonathan Van Dyke directed the production: “My One and Only is the all singing, all dancing, all hilarity Gershwin musical comedy and it’s such a thrill to be able to present it with Broward Stage Door Theatre,” he says. It was a giant hit in the early 1980’s with Tommy Tune and Twiggy and we have assembled a spectacular cast and creative team to tap this gem into the Lauderhill PAC. The song list is a treasure, and this feel good musical will have everyone “Kicking’ The Clouds Away”!”
Along with “Kicking the Clouds Away”, My One and Only features such Gershwin classics as “I Can’t Be Bothered Now”, “’S Wonderful”, “Strike Up the Band”, “Funny Face”, “Nice Work If You Can Get It”, and of course, “My One and Only”. 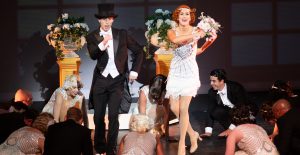 Van Dyke’s cast includes Derek Seay, who plays Billy Buck Chandler and Caiti Marlowe as Edythe Herbert. Also cast are Larry Buzzeo as Prince Nikke, Colleen Pagano as Mickey, Michael Small as Reverend Montgomery, and Ben Bagby as Mr. Magix. Bagby was in the original Broadway production of My One and Only.  He reprises his role at LPAC this year. 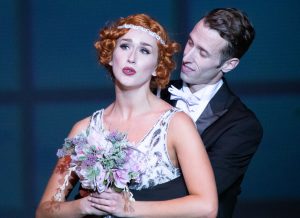 “The year was 1983 and I had just gotten my Actors Equity card from a contract with Dreamgirls,” Bagby reminisced recently. “I began going to Equity auditions for Cats, My One and Only, and other shows running on Broadway at the time. The night before I opened in My One and Only, I was offered a spot in the Broadway cast of Cats. Of course, I declined but it was nice to be asked.
“I went into the My One and Only cast in August ’83 as a replacement. This means I didn’t get to appear on the Tony Awards, but I did get to record the Original Cast Album (thus my Original Cast status).

“In 2013, I was invited and attended the 30-year MOAO Cast Reunion in NYC (on my birthday) where I was able to catch up with cast members I had not seen or spoken to in 30 years.
“This will be my first time performing in any production of My One and Only since performing in it on Broadway 36 years ago,” He continued. “I’ve always wanted to play Mr. Magix so I’m absolutely thrilled I will have the chance to with the Broward Stage Door at the LPAC. Charles “Honi” Coles, the Original Mr. Magix, was my friend and has forever influenced the way I tap dance. I’m happy to be presenting his original timeless choreography in this role.”

Mr. Bagby was sensational in the role of Mr. Magix and, although I didn’t see him 36 years ago, his tap dancing is top notch and he was my highlight of the show! 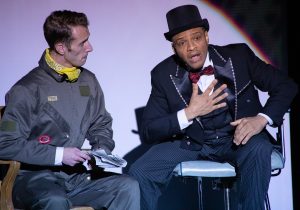 My One and Only will run until March 24 at the Lauderhill Performing Arts Center (LPAC). The theatre is located at 3800 NW 11th Place, Lauderhill (33311), in the Central Broward Regional Park on the North East corner of Sunrise Boulevard and 441 (State Road 7).

Tickets for My One and Only range from $48 to $58. (LPAC charges a $5 service fee per ticket, however if a package of four Stage Door shows is purchased the service fees will be waived.) Group rates are available, as are student prices (with valid ID). Tickets may be purchased by calling the box office at 954-344-7765 or 954-777-2055 (LPAC) or on line at www.stagedoorfl.org or on the LPAC website at https://lpacfl.com.

For more information about My One and Only and/or Stage Door Theatre, please visit www.stagedoorfl.org, or contact Derelle Bunn Executive Producer/Artistic Director, at DerelleBunn@yahoo.com / 954-344-7765 or Carol Kassie (carol@carolkassie.com / 561-445-9244).
~
My One and Only
Through March 24, 2019

The upcoming shows at LPAC are exciting and just around the corner.
GHOST, THE MUSICAL begins its run from APRIL 12-MAY 5. The show features the incomparable UNCHAINED MELODY, which is always on the ‘top 10’ of all-time best tunes. I’m excited to not only see this great story of powerful love story that endures even after death.

THOROUGHLY MODERN MILLIE THE MUSICAL, winner of 6 Tony Awards on Broadway, including best musical, debuts at LPAC on May 24 and will run through June 16, 2019.

July 5 – July 28, THE SOUL OF MOTOR CITY, debuts at LPAC featuring classics from The Temps, The Tops, Aretha Franklin, Diana Ross & The Supremes, and many others.

If you haven’t had the pleasure to visit the Stage Door Theatre’s new venue Lauderhill Performing Arts Center, plan your experience early for best seats. Enjoy a beautiful venue and a wonderful production.

The theatre is located at 3800 NW 11th Place, Lauderhill (33311), in the Central Broward Regional Park on the North East corner of Sunrise Boulevard and 441 (State Road 7). Parking is free, ample and on-site.